Robert Liparulo
Robert is a friend of mine with some great stuff out there and has helped me a great deal with my writing, it will be a must read !!!!

Robert Liparulo is a former journalist, with over a thousand articles and multiple writing awards to his name. His first novel, Comes a Horseman, released to critical acclaim. Each of his subsequent thrillers—Germ, Deadfall, and Deadlock—secured his place as one of today’s most popular and daring thriller writers.

He is known for investing deep research and chillingly accurate predictions of near-future scenarios into his stories. In fact, his thorough, journalistic approach to research has resulted in his becoming an expert on the various topics he explores in his fiction, and he has appeared on such media outlets as CNN and ABC Radio.

Liparulo’s visual style of writing has caught the eye of Hollywood producers. Currently, three of his novels for adults are in various stages of development for the big screen: the film rights to Comes A Horseman. were purchased by the producer of Tom Clancy’s movies; and Liparulo is penning the screenplays for GERM and Deadfall
for two top producers. He is also working with the director Andrew Davis (The Fugitive, Holes) on a political thriller. Novelist Michael Palmer calls Deadfall “a brilliantly crafted thriller.” March 31st marked the publication of Deadfall’s follow-up, Deadlock, which novelist Gayle Lynds calls, “best of high-octane suspense.”

Liparulo’s bestselling young adult series, Dreamhouse Kings, debuted last year with House of Dark Shadows and Watcher in the Woods. Book three, Gatekeepers, released in January, and number four, Timescape, in July. The series has garnered praise from readers, both young and old, as well as attracting famous fans who themselves know the genre inside and out. Of the series, Goosebumps creator R.L. Stine says, “I loved wandering around in these books. With a house of so many great, haunting stories, why would you ever want to go outside?”

With the next two Dreamhouse books “in the can,” he is currently working on his next thriller, which for the first time injects supernatural elements into his brand of gun-blazing storytelling. The story is so compelling, two Hollywood studios are already in talks to acquire it—despite its publication date being more than a year away. After that comes a trilogy of novels, based on his acclaimed short story, which appeared in James Patterson’s Thriller anthology. New York Times bestselling author Steve Berry calls Liparulo’s writing “Inventive, suspenseful, and highly entertaining . . . Robert Liparulo is a storyteller, pure and simple.” He lives with his family in Colorado. 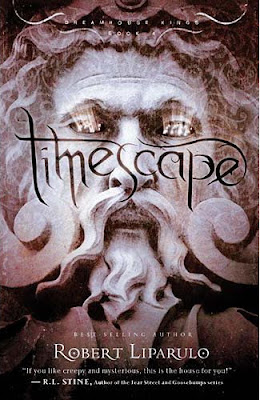 David, Xander, Dad, and Keal have discovered a terrible secret. Now, finding Mom is only a small part of their mission. And time is running out. Using the portals to build an empire, Taksidian wants the house for himself, and there’s nothing he won’t do to get the family out. The consequences of his meddling reach far beyond the family–to the future of the world itself. The Kings know their survival depends on stopping the bloodthirsty assassin. If only they can find his weakness in time.

Most startling of all is their ability to change the path of history. But will their tinkering in time reunite the family and save the future . . . or set mankind on an irreversible course of destruction? 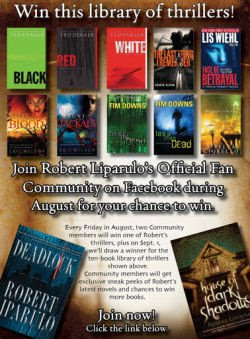 If you would like to read the first chapter of Timescape, go HERE

Enter the contest to win this book package by clicking on the image!!!